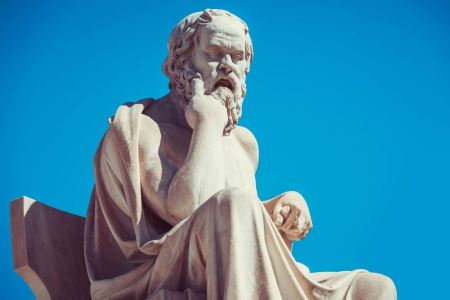 “The secret of change is to focus all your energy, not on fighting the old, but building the new” – Socrates.

Anyone interested in learning more about the life and times of Socrates, as well as the Buddha and Confucius, should check out a very well done documentary on Netflix that I just finished watching called “Genius of the Ancient World”.

The true image of Socrates was contrary to that of the well robed philosopher that we’ve come to believe.  He was a poorly dressed hobo who relied on the charity of others for his livelihood.  However, his speeches became well known throughout ancient Athens, which also got him into trouble and ultimately resulted in his execution.  Had it not been for Plato and other followers documenting Socrates thoughts, the mind of this great philosopher would have been lost to history.

At the core of his teachings is what was later to be known as the Socratic method, which held the use of questions and logic for discovery and idea formation.  It constitutes the basis of the legal and justice system in western society and also placed the foundation for moral, ethical and political thought.  Socrates teachings were well ahead of their time and are as relevant today, or perhaps even more relevant, than they were in ancient Greece.  Wisdom is eternal.  Some of his best known quotes include:

“Be kind, for everyone you meet is fighting a hard battle.”

“The years wrinkle our skin, but lack of enthusiasm wrinkles our soul.”

“Be the kind of person that you want people to think you are.”

“Life contains but two tragedies. One is not to get your heart’s desire; the other is to get it.”

“Let him that would move the world, first move himself.”

“Nature has given us two ears, two eyes, and but one tongue-to the end that we should hear and see more than we speak.”

“How many are the things I can do without!”

Article Name
Socrates
Description
Anyone interested in learning more about the life and times of Socrates, as well as the Buddha and Confucius, should check out a very well done documentary on Netflix called “Genius of the Ancient World”.
Author
Maria Schmid